7 Traits of The Female Narcissist She easily engages in sexual acts with people.

Few reasons, sex can be a way to gain control and manipulate someone. People are more inclined to be less logical with people they are having sex with.

It is a very intimate thing they share and is assumed you can trust the person if you are engaging in sexual activities.

Often when they “won” you over with their sexuality they will use it to their advantage.

If you don’t comply with how they want you to behave and their rules, they will punish you with less sex.

At first, sex seems to be a genuine bond and connection, but with the female narcissist, it’s just another tool in their arsenal to manipulate you(mentally and emotionally).

Many men are sexually deprived, and a female narcissist will use this to get what she wants with the man she is in a relationship with.

She is cold and distant when you are not doing things that are pleasing to her, but once you behave in a way she does want she may reward you with sex.

The problem lies, in what sort of behaviors you need to do to get “rewarded.” For some women, it means the man has to buy them gifts, pay the rent, their expenses, or generally by meeting her needs.

The female narcissist can be rather promiscuous jumping from relationship to relationship. Man after man(or woman).

Since they often feel bored and empty without someone’s attention or admiration they will jump from relationship to relationship.

Another reason is that since the people in their lives get annoyed with their toxicity they have been pushed away or break up, and need to start over again.

But, it could be because they have gotten bored with the person and wishes to start the process again with a different target(or victim).

The female narcissist will often seek ways to get your attention. She will throw tantrums, create drama, and act impulsively all for the sake of giving her attention. Without attention, they feel empty, and when they have attention and admiration they get what is known as narcissistic supply. 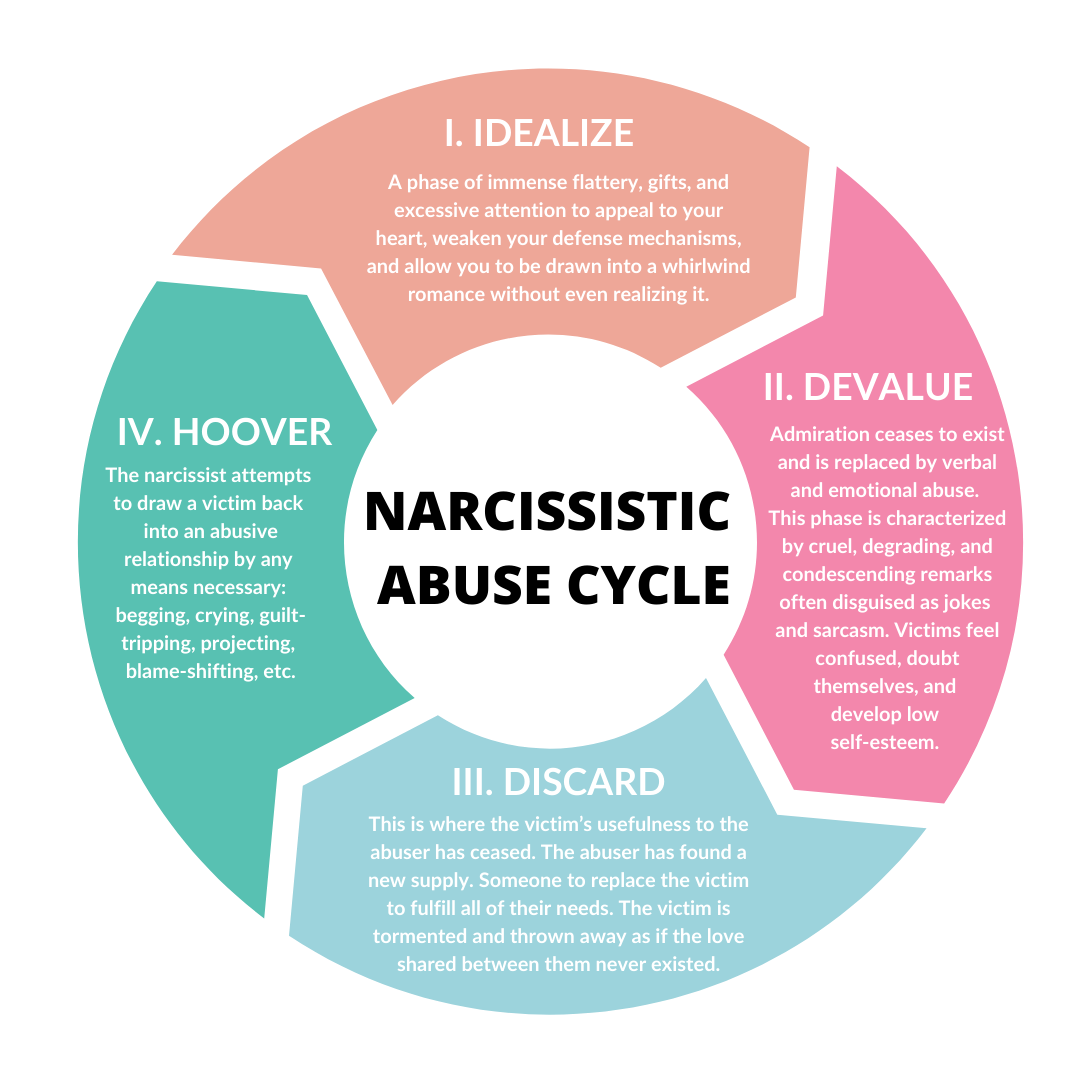 First, they idealize you.

You are the best thing that has happened to them, the best lover, partner, friend, etc.

In this phase, they will be on their best behavior with their performance.

They will love bomb you, giving you compliments, giving you gifts, or doing anything to impress you.

Most people will mistake this as love or a genuine connection and will lower their guard.

Secondly, they will devalue you.

This is when you start to notice the changes in who they are.

During this phase, the compliments will be exchanged with verbal abuse belittling who you are as a person.

They begin to break you down.

Everything you do is not good enough, and you are flawed in some type of way.

They will call you out on your mistakes, flaws, and even make fun of the things you are talented at.

Thirdly, you will be discarded.

You have lost value in their eyes for potentially any number of reasons:

They lost respect, not stimulating enough, not satisfying their needs enough, not worshipping them the way they want, not making them feel special, challenging them, etc.

If the relationship has been going downhill for a while they most likely already picked a new target while still in a relationship with you.

They still need their narcissistic supply after all. And since the relationship with the other person has gotten rotten, they figure to have someone else as backup.

They may be casually flirting, emotionally cheating, or even having casual flings while in a relationship.

At some point, the other person is completely discarded both have gone their separate ways.

Fourthly, this is where it gets interesting, the hoover phase.

Likely the narcissistic has been keeping tabs on you still checking on you to see how you are doing in your life.

Whether you met new people, how your career is going, etc.

They have begun the cycle with someone else, but the same pattern has happened with the other person.

So, sometimes they will beg you to come back to your life.

They will have tantrums, hissy fits, say they have changed, and do anything in their power to get you back.

They stalk their prey to make sure they can their supply again if they need to.

This new breakup may make them feel frustrated about themselves, and instead of changing for the better, they seek new emotional supply(or narcissistic supply) to make them feel better(and avoid feeling negative emotions).

In the relationship, the narcissist tries to gain power and control you.

This could mean asking to see your text messages.

Wanting to know who you are talking to over the phone.

These are small little mind games to get a feel of their victim, it is also a way for them to know they are in control.

The average person does this as well, but more from a conversation standpoint and not a strategy to manipulate or control another.

They will often make rules for how you need to be in your life, and it must fit exactly what they want it to be, or else there is a problem.

The objective of the narcissistic is to trap you in the relationship to keep you like a slave.

They have tactics to manipulate people to ensure they get what they want and keep the other person around like a little puppy.

Complimenting a narcissist is fuel for them like gasoline for a car.

They can never get enough compliments, it is never enough.

Praises and compliments make them feel special which feeds their ego(their superiority complex).

In truth, most narcissistic are rather insecure people which is why they constantly need to be complimented.

Sometimes, they will fish for compliments, to get that supply, and feed their ego.

They are very needy for compliments, but they also, never or hardly give any to others.

Since it is all about how they feel it is not important for them to give compliments to others.

They rarely even do so much as to give you a thank you.

The narcissistic desires to feel special and feel better than others.

If they perceive someone else as better than them in a type of way they will resort to petty insults, to prevent themselves from getting hurt.

It is also an attempt to hurt the feeling of another and casually try to lower the esteem of another.

Female narcissistic will often gossip behind other people’s backs, especially about other women.

If another woman is getting positive attention you can bet the narcissistic is making sly remarks behind their back.

The female narcissistic will easily get jealous if another girl is prettier than them, gets more attention, or feels inferior in any way.

It’s not always a logical thing, but a decision they do base on how they feel.

If men are giving attention to a certain woman, the female narcissist will often be jealous, and/or talks badly about that girl for whatever the reason.

Could be because they have a better personality, better physique, and feels threatened by them.

To feed their sense of superiority and general need to feel special you will often see them wear expensive clothes, expensive cars, etc.

Money provides this type of woman a huge ego boost and makes them feel better than others. This is why they pursue to make money at any and every cost. It helps to feed their ego.

Without money, it is harder for them to keep a superior position, and when they do have money it is easier for them to look down on others.

They want things to be able to impress other people.

They will often show off what they have gotten casually or overtly.

The narcissist wears a mask in public for a variety of reasons.

A lot of times it is because they have not developed a healthy ego and strong sense of self.

Often times they won’t even know what it means to be a normal human and don’t understand most social interactions.

This is why the narcissist begins to copy and mimic people who they perceive as knowing what they are doing.

They also change themselves with who they are talking to as opposed to being themselves because this will ensure people will like them and they will be perceived in a positive way if they copy the environment(or they think at least).

In short, the narcissists lack an identity of their own, so they copy someone, and they will also adapt to the environment they are in.

If you found this helpful do share this on social media platforms or with a friend who may need to see this.